The turn of the year was a bit of a rough ride. My grandmother died, my last living grandparent, and although I did not have a deep personal relation with her, it felt as if a phase in my life had ended. Unexpectedly, her death has led me into one of the most profound crises of faith I ever experienced.

Just two days after my grandmother passed away, I was on a plane with four friends to travel north. For three years we had saved money to rent a cabin, buy flight tickets and book a dog sled ride and a snowmobile trip, and, most of all, to see the polar lights in Lapland. It was a trip we looked forward to as only a group of men – basically children in a supersized body – can do.

We were lucky. Weather conditions were absolutely fantastic, and we got to see the northern lights three times. The most impressive spectacle was on a very cold night, on the top of a hill.

Our guide told us two explanations for this natural event. The first was the scientific explanation, the second a mythical explanation. Actually, there are a number of myths connected with the aurora borealis, but the ones which, given my personal situation, attracted my attention were the myths told in North America. They all revolve around our deceased and/or around a guardian spirit who watches over them and/or over us.

Of course I know these myths can be explained as the result of cultural evolution, but in my own theological research I propose that we can take these explanations into account to enrich, instead of to reduce, the meaning of religious symbols. Basically, I advocate for a second naiveté position, although I do not refer to Ricoeur explicitly (you know: time and place restraints…) in my Phd.

So when the guide told us those myths, I expected to be able to draw some comfort out of seeing the polar lights, to feel some connection with my personal past. But nothing happened. What I felt there, on that mountain top, was utter loneliness. It was not a feeling of grief because of the loss of my immediate ancestors. It was more the realization, both conceptually and emotionally, of the vastness of the universe – which causes polar lights to appear in the Earth’s atmosphere – and the smallness of humankind – which only recently began to understand the connection between this phenomenon and the solar system of which Earth is but one part.

I always have had faith in Christianity as a religion of ‘connection with the world’. Jesus Christ, I believed, revealed in a particular way how human beings are relational beings, embedded in a reality that is profoundly characterized by love, embraced by a loving God. That night I felt nothing but cold, literally and metaphorically. I saw the patterns in the sky, I knew both why these patterns appeared and why people tend to see meaning in patterns like that – and I couldn’t get past those scientific explanations and reach for a religious interpretation.

The experience stunned my intellectual and religious life. I haven’t written on this blogpost for weeks, months even because of it. An article I was working on has gathered digital dust, and even completing the final edits for my phd fell victim to procrastination. It all felt wrong, dishonest. But recently things began to change again. It all has to do with taking time off in Tyrol, Austria. In a little Alpine church I saw this crucifix:

The Christ figure is literally carved out of the wood,  while remaining part of it. For me, it is one of the best illustrations of the deep history of religion, of how religion emerged from within the complex natural processes that defined (and continue to define) our species, while always remaining part of these processes. 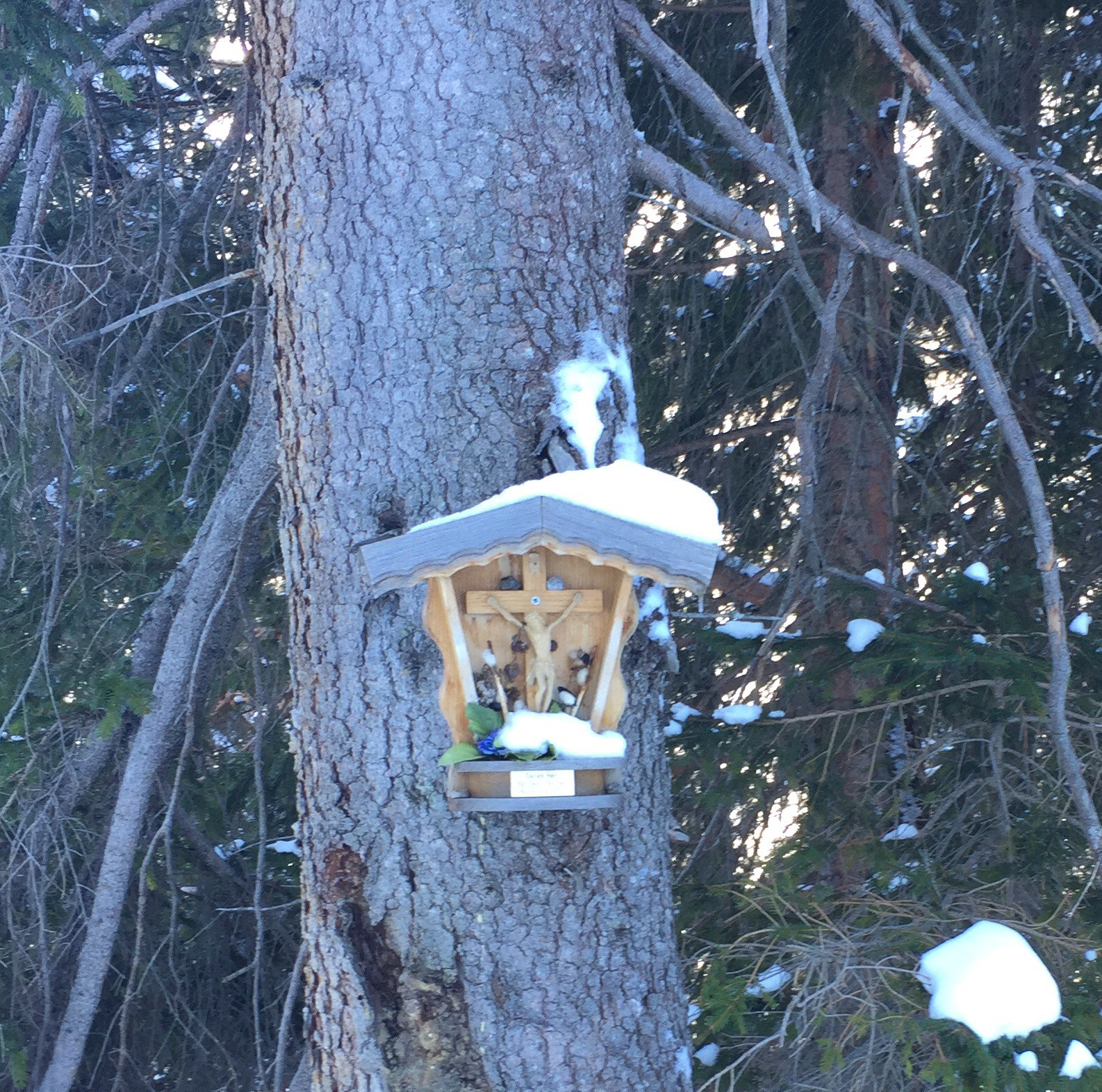 It bears a message, reading: “Thank you God, for what you have showed me here.” There is no way of knowing of what was shown when, and to whom, but it could well be something like this:

I could of course discard the little crucifix, arguing that whoever placed it there saw nothing but faces in the clouds. But then again, what if that was the case? What if that man or woman saw sunbeams shining through the forest, and recognized them as a meaningful pattern? What if those sunbeams can represent the deepest ground of being, reality as it really is (Philip Hefner), while also remaining part of nature, thus while also remaining sunbeams? What if I took at face value what I wrote above – what I thought when I first saw it – about the crucifix in the church being carved out of a wooden beam, while remaining part of that same wood?

In short, I started to realize that it is not enough to accept on a conceptual level that religion is part of the evolutionary history of life on Earth. What I did not realize, watching the polar lights in Lapland, is that such understanding has to be part of lived faith, if it’s to become part of a genuine spirituality. And only as part of spiritual life will the recognition of the evolutionary roots of religion have any theological meaning.

What it means to live your faith in full recognition of the evolutionary roots of religion, is something I’m still only beginning to discover. It certainly is not the same as a naive, uncritical return to nature, in the worst kind of new-age-like way, on the contrary. And it certainly is a fragile, vulnerable endeavor. But it is also, I believe, in a very fundamental way a recontextualisation, a revitalisation, of the natural roots of my own religious tradition.

I can still feel the cold when I think back on that night in the very north of Sweden, when polar lights made us look to the sky in awe and wonder. And I still do not see any comfort or consolation for the death of my grandmother in them. But I do see them, somehow, as a reminder of the fact that we are not only merely one species on but one planet in just a corner of a vast universe – but also of the fact that we know all this. Religious traditions are complex cultural systems. One of the things they help us do, is to think about what that means: that we know all this.

For some, this will all sound like I’m clinging to an illusion to dear to me to discard. Some would probably label me a secular Christian, or would doubt whether my personal faith is still within the boundaries of orthodoxy. To all of them, I can only say that I know there is no proof that the patterns of the aurora borealis reveal anything about the world we live in, or about the meaning of our history. Whatever meaning we see, it emerges from natural processes. But that does not stop it from enabling us to understand where we come from, where we are, and where we might travel to in the future.

Where all of this will take me, I’m not sure. To be honest, this was not a blogpost I enjoyed writing. But even though my blog does not attract many visitors, I felt I owed it to you, reader, to explain why I have not been writing for so long. Next blogposts will not (necessarily) be about my personal faith, but there will be next blogposts about the relation between culture, religion, and evolution. Take care.