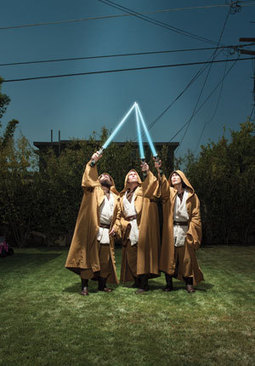 In the years after the first Star Wars trilogy, a group of dedicated followers built their own religion: Jediism.

You can be dismissive about this, calling it a joke that went out of hand. But I see the dynamics of culture at work, going from old religious wisdoms over movie culture (e.g. using these wisdoms as part of a Star Wars or a Lord of the Rings mythology) to new forms of religion. Even if this is tongue-in-cheek for the members of Jediism, the phenomenon as such intrigues me.

From a theological point of view the main question is – as in the study of pluralism – whether, to what extent, and how divine revelation can be discerned here. In fact, that is a question that circles around in my head since I began thinking about the implications of evolutionary studies of religion for theology. Does an evolutionary explanation of (elements of/the origin of) religion rule out the self-understanding of a religious tradition as grounded in revelation, labelling it an illusion? I think not, but it does ask for a recontextualisation of the concept ‘revelation’ in this age of science. An interesting book that I’ve recently read and, in my view at least, offers some conceptual tools for this, is Gerd Theissen’s ‘Biblical Faith: An Evolutionary Approach’: http://www.amazon.com/Biblical-Faith-ebook/dp/B001L5U3MS/ref=la_B001HODGLI_1_13?s=books&ie=UTF8&qid=1383308517&sr=1-13

If you have other sources on this issue: please post them as a reaction on this blogpost! Thanks in advance 😉

2 thoughts on “The Church of the Jedi”