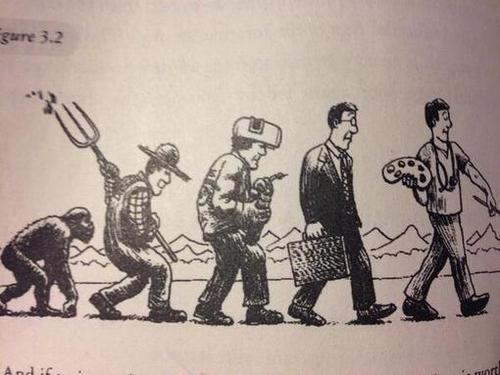 There are many cartoons on evolution out there, most of them building on the same theme: a row of men(!) depicting some kind of progress, ending in a caricature of today’s life. You might have seen the one starting with a chimpansee-like creature, bowed to the ground, and ending with a man sitting behind his computer, also bowed to the ground: a clear comment and critique on the idea of ‘progress’.

This one is a bit peculiar, because it is based on two myths. First, it depicts the idea that evolution is a kind of linear process, going progressively through some intermediary stages towards an ultimate form of life. There are no side branches, there is no indication that we actually do no know in advance which branch(es) will survive (and thus, in hindsight, become the main branch), and there is no suggestion that each of the stages we see are in fact the most adequate answers possible in a given context to the challenges of the environment, instead of being ‘just’ intermediary. In short: the cartoon just gives the wrong idea about how evolution works.

Secondly, it builds on the myth of the left and right hemisphere of the brain. For more info on that, see e.g.: http://www.positscience.com/brain-resources/brain-facts-myths/brain-mythology, or: http://theeconomyofmeaning.com/2013/08/16/for-who-still-thought-there-are-left-and-right-brain-people-research/. In short: the cartoon just gives the wrong idea about how the brain works.

But in itself, cartoons like these of course are of course just fun. Don’t let me spoil that god you 😉